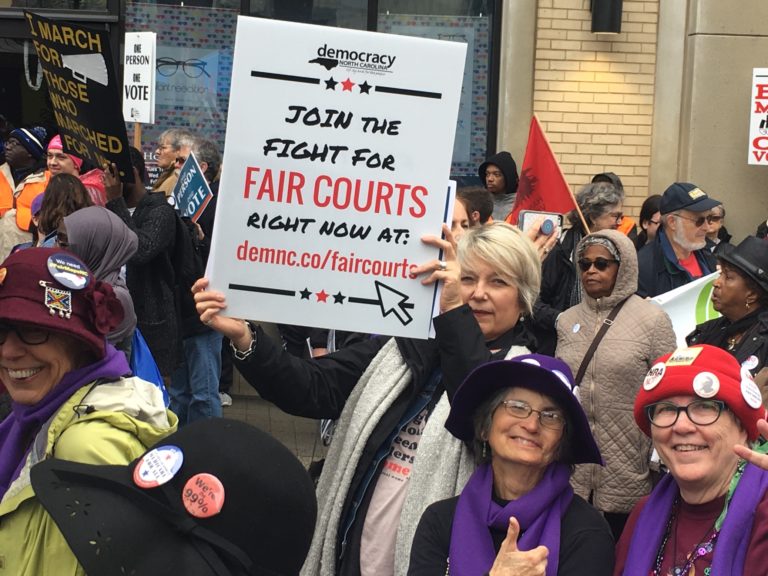 North Carolinians were victorious in pushing back attacks on our courts during the N.C. General Assembly’s 2018 special session, but the May 2018 short session promises more proposals to rig our justice system from political bullies working for their own partisan interests. In response, the public is pushing back on these attacks in local media, calling out legislative efforts to rig the judiciary for partisan control. Read more editorials at our Fair Courts hub.

On April 16, a bipartisan panel of Forsyth County judges came together for one reason: to speak out publicly against the state legislature’s recent attacks on the judiciary.

The judges’ message was clear: our justice system exists so that everyone can rely on fair treatment from independent courts, but many in the legal community feel like that system is under attack.

Judge Miller, a Republican and self-professed NRA member, told the packed room, “I’ve been practicing law for over 40 years … I don’t sit on the bench as a member of the NRA or a Republican, I sit there as a District Court judge … I disagree with the bills that have been proposed and I think they’re horrible ideas.”

Over the last few years, politicians in Raleigh have pushed an array of proposals to strip our courts of their independence by radically altering the way North Carolina chooses judges. They’ve made our judicial elections partisan, eliminated the 2018 judicial primary and floated plans to gerrymander the voting districts for our courts or eliminate judicial elections altogether.

About these partisan legislative proposals, Judge Menefee added that “every voter needs to know that we’re not here to serve a political party, we are here to serve you and uphold the law, including placing checks on the legislature and the executive branch.”

It appears it’s those very same “checks” that have prompted legislators to lash out at our judiciary. As with congressional and legislative gerrymanders before them, proposed judicial districts could deeply impact Forsyth County voters’ ability to select judges that reflect our diverse community. Another proposal that allows lawmakers to pick judges could eliminate Forsyth voters’ ability to pick our judges altogether.

“Our [judicial] diversity is so important to maintain, because that’s what Forsyth County looks like … our bench looks like that because we’re elected by the people of our county,” said Judge Vickery. “Redistricting will make that look different.”

I’m proud that Forsyth judges are standing up against these brazen attacks on our judiciary and the alarming motivations behind them.

It’s time for more of Forsyth County’s elected officials to follow their lead, and that of a growing number of other impacted municipalities, by passing a resolution to oppose these judicial attacks that could so negatively affect our county.

Ensuring that all North Carolinians are represented by an impartial judicial system regardless of race, party affiliation or zip code is vital to safeguarding the public trust. By passing a resolution in opposition to these judicial attacks, as counties like Beaufort, Davidson, Durham, Pitt and Nash already have, Forsyth could send a strong message to politicians in Raleigh that, like one Beaufort County commissioner put it, “you don’t know our county the way we do.”

With only a few weeks until the N.C. legislature reconvenes to take up these changes, it’s time for Forsyth County to do what it can to fight back. This week our judges stood up for us. It’s time we did the same for them and the people that they serve.