According to data from the North Carolina State Board of Elections and Ethics Enforcement released October 22, voters have cast 430,841 ballots at Early Voting sites since the start of this year’s 18-day Early Voting period.

As stated in Democracy NC’s analysis of turnout for the first day of Early Voting, there is no perfect election to use for comparison. The chart below compares vote totals after the first weekend. It is important to note, however, that the 2018 total is the result of five days of Early Voting compared to the other years’ four days, due to 2018’s new Wednesday start.

After the first weekend of Early Voting in 2014, which was only a 10-day period, 297,599 ballots had been cast. In fact, totals for 2018 currently exceed the vote count at the midpoint of the 2014 cycle (428,887), when there had been five days of Early Voting and there were five days of remaining (the large jump is likely due in part to satellite sites opening on that fifth day). Due to this year’s 18-day cycle, voters have 13 more days to cast ballots at Early Voting sites. 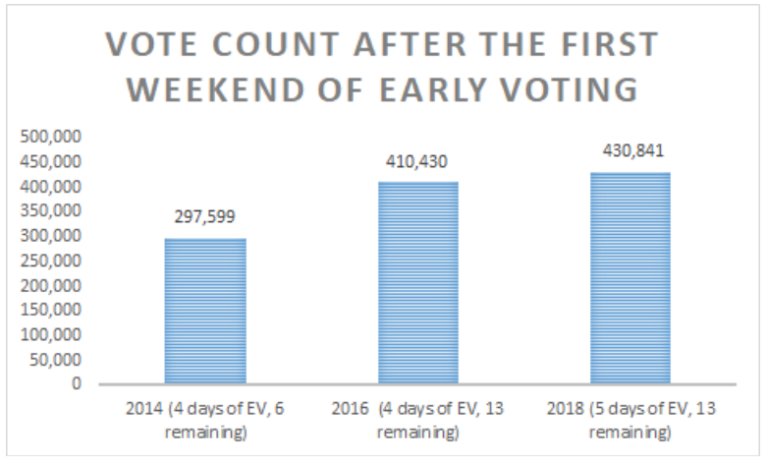 Since Early Voting is 18-days long this year, Democracy NC will release in-depth analyses of turnout patterns across the state on Mondays and Thursdays throughout the remainder of the Early Voting Period. These analyses are based on one-stop absentee ballot data available from the North Carolina State Board of Elections and Ethics Enforcement.