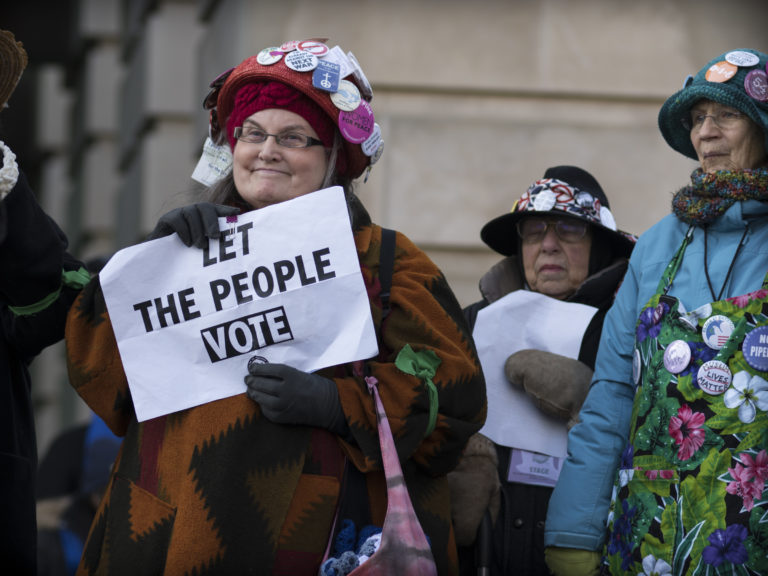 (Updated as of Thursday, August 30)

For anyone who cares about elections in North Carolina, this week has already been one for the books.

On Monday, August 27, the N.C. General Assembly adjourned a two-day special session during which lawmakers rammed through changes to two of six constitutional amendments that will appear on ballots this fall. The whirlwind session was called after a state three-judge panel tossed the proposed amendments, finding their language would be misleading to voters. The issue remains live in the state courts, and we may yet see action from the N.C. Supreme Court. Earlier in the process, we partnered with the Brennan Center for Justice on an amicus brief highlighting the challenged amendments as a troubling attempt by legislators to entrench political power.

The same day, a federal three-judge panel once again struck down North Carolina’s congressional voting districts as partisan gerrymanders. The court found the legislature’s intent to create congressional maps that elect 10 Republicans and 3 Democrats was “contrary to the Constitution’s vesting of the power to elect representatives in ‘the people.’” The federal court ruling opens the door for more competitive congressional voting maps in North Carolina and a U.S. Supreme Court ruling on the merits of partisan gerrymandering that would have national implications.

So what does it all mean for North Carolina?

The federal panel has set a Friday (August 31) deadline for parties in Common Cause v. Rucho to provide briefs advising whether old maps should be used for the General Election or whether the N.C. General Assembly (or an outside expert called a “special master”) should redraw new districts. New maps would need to be drawn by mid-September.

In addition to determining if and when maps will be redrawn, decisions are still pending as to when any new congressional maps could be used. The court made clear that several options are on the table, including ones that would:

Ultimately, it appears the U.S. Supreme Court will decide. And the decision is likely to be appealed to the nation’s highest court very soon. A 4-to-4 Supreme Court vote, created by the retirement of Justice Kennedy, would leave the lower court’s ruling in place. But with the confirmation hearing of a new Supreme Court justice pending, it remains unclear how the court will come down on what would be a historic partisan gerrymandering decision for North Carolina and the nation.

Instead of removing two amendments tossed by the courts for being deceiving to voters, the N.C. General Assembly instead returned this week to replace them with more misleading amendments that would erode checks and balances in our constitution for partisan gain.

[To view the full text of the six proposed 2018 constitutional amendments, visit demnc.co/amendments.]

As a result, more litigation is expected from the governor and advocates, even as state election officials attempt to finalize and print 2018 ballots ahead of requirements that absentee ballots be issued by September 22.

On Wednesday, August 29, the North Carolina Supreme Court ordered the state’s elections board to halt preparation of voting ballots amid a second legal challenge from the NAACP of North Carolina challenging the legality of four of the six amendments.

North Carolina’s highest court rejected late Wednesday requests by Gov. Cooper and the NAACP to hear immediately challenges to a pair of constitutional amendments that Republicans rewrote earlier this week. According to a report by the Associated Press, “With time dwindling before November ballots must be finalized and printed, Cooper and the NAACP asked the justices if they could use their old lawsuits to challenge the new questions. The court said no.”

Based on a statement released Wednesday, August 29, by the N.C. State Board of Elections confirmed the abbreviated timeline for printing ballots amid all of the changes, litigation, and rulings:

It takes about three weeks to prepare, print, test and deliver ballots to counties across the state. To meet the federal deadline, that process should start around Sept. 1, although the State Board staff is exploring additional options to ensure federal compliance if delays continue.

Also, a three-judge panel recently found that the state’s 13 congressional districts reflected unconstitutional partisan gerrymanders and asked the parties to address how and when congressional elections may occur this year.

As the legal process unfolds, the State Board office will provide information via our Facebook and Twitter feeds and through news releases available at ncsbe.gov.

This week’s changes to existing amendments will likely also have implications for their order on the ballot — with the most recent, rewritten amendments moving to the bottom, according to session law order.

Assuming all six amendments survive legal scrutiny, from top to bottom, amendments would now be listed in the following order with the same caption for each (“constitutional amendment”):

[To view the full text of the six proposed 2018 constitutional amendments, visit demnc.co/amendments.]

And the week’s not over yet — we’ll update you with the latest as soon as we know more.

In the meantime, click here to download the latest version of our resource “Fast Facts About the Proposed 2018 Constitutional Amendments.” It’s full of information about the harms of these dishonest amendments and how you can make sure your networks are informed before they vote this fall.