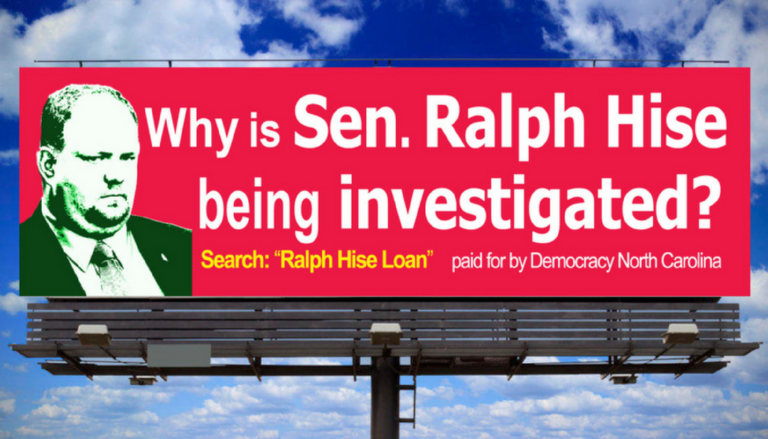 (June 16, 2017) — As the General Assembly considers major legislation (HB-581) to cut back regulation of the billboard industry, a nonprofit organization is criticizing two of the state’s largest billboard companies for “political favoritism and censorship.”

Democracy North Carolina, a voting rights and campaign finance watchdog group, has been trying to post billboards calling attention to an ongoing investigation by the State Board of Elections into the campaign finances of state Sen. Ralph Hise. Hise is a Mitchell County Republican and chair of the Senate Select Committee on Elections; his legislative district covers six counties in western North Carolina.

Hise has allegedly withdrawn about $10,000 in excess “loan repayments” from his campaign and also failed to disclose receiving more than $9,000 in donations from political action committees (PACs). Democracy North Carolina says his campaign reports have more missing information and are “the worst of any current state legislator.”

“We’ve been trying to let the voters in Sen. Hise’s district know about his problems for a month, but the billboard industry seems so worried about making him mad that they are refusing to rent us space for our message,” said Bob Hall, executive director of Democracy North Carolina.

“We’ve been trying to let the voters in Sen. Hise’s district know about his problems for a month, but the billboard industry seems so worried about making him mad that they are refusing to rent us space for our message.” –Bob Hall, Democracy NC

But then, in both cases, regional managers of the companies called to cancel the contracts, saying the message proposed for the billboards “was political and too controversial” or “too controversial and could cause problems for the company,” according to Hall.

“It was very clear in talking with the billboard executives that we’re the victim of political favoritism and censorship,” said Hall. “Lamar has a billboard attacking Muslim immigrants on the I-40. Billboard companies are involved in plenty of controversial and political advertising, but they also have high-priced lobbyists in Raleigh, they want favorable legislation, and they don’t want to anger a powerful state senator at this crucial time.”

“It’s very disappointing,” Hall concluded, “but we’ll continue to shine the light on Sen. Hise’s campaign violations and expose whatever he is hiding.”

It’s time to tell our leaders to stop their schemes and support voters.

Say NO to Trump

Tell the Elections Board that NC's private data shouldn't be used for trumped up claims of voter fraud by Trump's Fraud Commission.

From judicial attacks to gerrymandered districts to new voter suppression bills — tell your lawmakers to stop their schemes against voters.