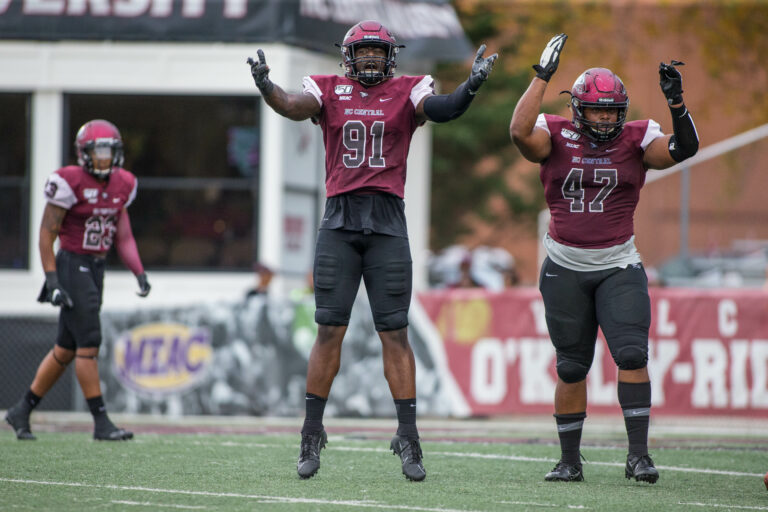 MORRISVILLE, N.C. (11/10/21) –  Jessie Malit, 22, of North Carolina Central University is one of only 22 college football players in the nation to earn distinguished recognition as a member of the 2021 Allstate AFCA (American Football Coaches Association) Good Works Team®, celebrating his accomplishments on the field, in the classroom, and in the community.

“It’s a fulfilling feeling. Creating relationships and building bonds with other people is what I enjoy most about doing community service,” Malit said, thanking professors for guiding him. “It’s important because you have to understand there are less fortunate people out there.”

Allstate is awarding $10,000 to a nonprofit of Malit’s choice as part of the recognition. He chose Democracy North Carolina after learning about the organization from his cousin, Jessica. He researched its programs and liked what he saw.

“I’m interested in civic engagement and voting rights,” Malit said. “You can really see changes if you get people active. Democracy North Carolina does that.”

The senior defensive end on the Eagles football team spearheaded the NCCU Student-Athlete Advisory Committee’s E.A.G.L.E.S. (Educated Actions Generate Lifelong Empowerment & Success) Vote initiative in October 2020, including a campus-wide March to the Polls event. Out of a possible 315 eligible student athletes, 289 registered to vote, or 92 percent, including 100 percent of the football team.

Thanks to Malit, the Allstate grant will help support Democracy NC’s work to protect democracy and promote citizen ownership of the government. As part of its mission to help North Carolinians achieve meaningful pro-democracy policies, the organization engages in a variety of activities, including the Democracy Summer Program, an internship program for college-age students.

“Jessie Malit is a prime example of what our state and country need today: active, engaged young people that believe in and fight for our democracy,” said Adrienne Kelly, Interim Co-Executive Director of Democracy NC. “As a Black man, it is especially significant that Jessie is serving as a positive role model in his academics, athletics, and civic engagement. We are very grateful to him for recognizing the work that Democracy NC does and for supporting us through selection for this grant. We wish him continued success!”

As a student leader, Malit serves as vice president of NCCU’s Student-Athlete Advisory Committee, sits on the NCCU Football Leadership Council, and was chosen as the university’s representative for the national Campus Compact’s Newman Civic Fellowship. He is on track to graduate in December 2021 with a 3.3 grade point average. After graduation, Malit plans to pursue a Master’s degree and aspires to become a judge.

In the future, Malit also would like to work with middle school-aged children and encourage them to engage in community service. He credited his mother, a native of Kenya, with instilling in him the importance of giving back to the community at an early age.

“You have to start at the root level. When I was 13 or 14, I knew nothing about voting or civic engagement,” Malit said. “When I was younger, we did a lot of community service. I started to understand [at a young age] the meaning behind it and respect who I was doing it for.”