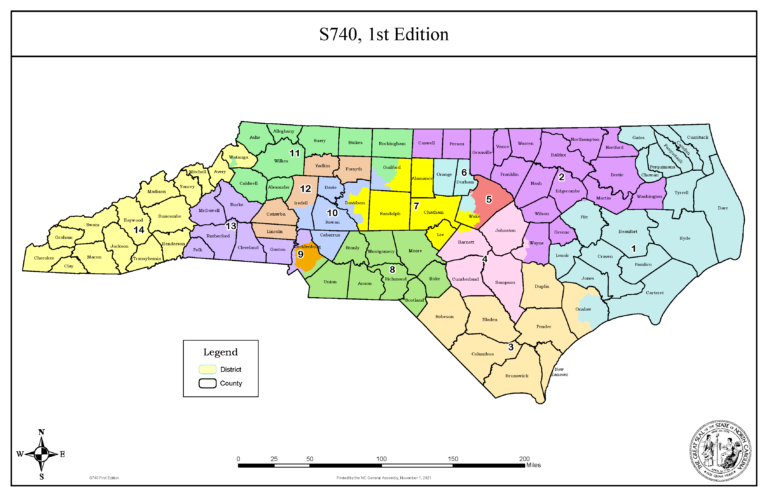 North Carolina (10/28/2021) — On October 20, 2021, the North Carolina General Assembly released proposed Congressional and state maps with little notice, announcing two final days of Redistricting Public Hearings scheduled for Oct. 25 and 26. This rushed timeline afforded North Carolinians only a few days to track down maps, analyze them, and prepare appropriate comments. Public hearings are the best way for community members to provide input on voting maps, ultimately impacting our lives for the next 10 years. So far, many of these proposals divide our communities and erode their power — all for politicians’ partisan gain.

Multiple statewide advocacy groups, including Democracy North Carolina, North Carolina Asian Americans Together, NC Counts Coalition, Common Cause NC, ACLU of NC, and Mexican American Legal Defense and Educational Fund, have united in calling out the many flaws of the current redistricting process, and uplifting the voices of community members which these proposed maps will ultimately affect. Many residents had to take time off work to make the mid-day Redistricting Public Hearings, with some even bringing their family as they could not find appropriate childcare with the few days notice provided by the NCGA.

Our organizations have previously called on the N.C. House and Senate Redistricting committees to ensure a fair, transparent, and inclusive redistricting process in 2021. Thus far, many of our collective demands have been left unmet, directly impacting accessibility for technologically disadvantaged and non-English speaking communities.

In total, just over 100 community members were able to provide public comments on proposed maps out of North Carolina’s 10+ million residents. Our collective analysis of public comments provided has revealed several themes, specifically raising concerns about the NCGA’s intent to have meaningful public input.

Many residents feel these post map public hearings are a sham. There was little notice provided to the public, no educational resources available to properly analyze maps, and no public timeline announced to ensure public comments are taken into full account.

Many communities across N.C., including Latine, Asian American and Pacific Islander, and Indigenous populations, feel they are purposely being left out of this process. There have been zero translation services or translated resources provided, and no interpreters available for public hearings.

People want an independent redistricting commission. A significant reason residents bring this up is to avoid the costs of litigation down the line, ultimately hurting taxpayers. If the NCGA is going to use taxpayer money to draw fair maps, fund an independent commission, not litigation

Communities of color represent the highest population growth in N.C. over the last 10 years (based on data provided by the 2020 Census). Yet many proposed maps draw Black incumbents out of their districts, potentially leading to an all-white N.C. Congressional representation. Many residents feel this is a deliberate attempt to dilute the vote of Black and brown communities, even if that means drawing districts that conjoin multiple counties stretching over 100 miles.

Every person in North Carolina will be affected by new maps, and everyone deserves the opportunity to have their voice heard during the redistricting process. District maps should be drawn to provide equal representation and appropriately reflect our state’s political makeup. Drawing fair maps allows communities to be represented by leaders who know their communities and will fight for needed resources to solve community issues, and promote growth and sustainability.

We strongly urge the NCGA to draw maps that ensure our communities stay whole and meet our needs – not politicians’ needs to gain or retain power.