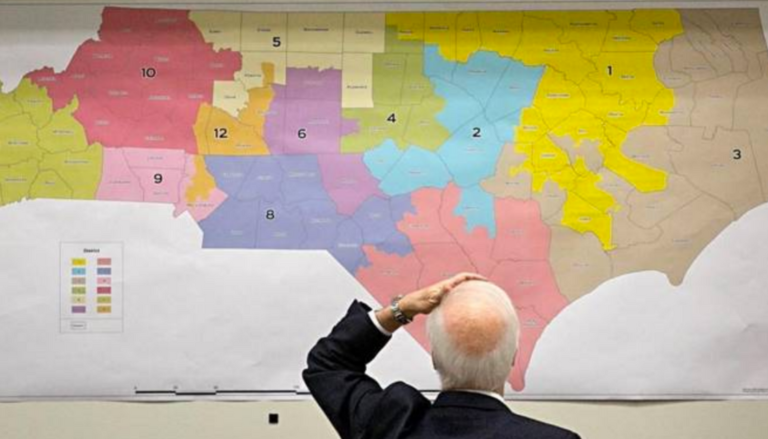 The following media release was provided by Common Cause NC.

RALEIGH, N.C. — Common Cause, the North Carolina Democratic Party, and a group of individual North Carolina voters are suing the state of North Carolina over the partisan gerrymandering of legislative maps for both chambers of the North Carolina General Assembly. The lawsuit, which was filed in the Wake County Superior Court, challenges the 2017 redistricting plans as violating the North Carolina Constitution and seeks to establish new, fair state House and state Senate maps for the 2020 elections – maps that do not burden or penalize any voter or party based on their political beliefs or past votes. The National Redistricting Foundation, a 501(c)(3) affiliate of the National Democratic Redistricting Committee, will be supporting the legal fees of Arnold & Porter, Perkins Coie, and Poyner Spruill as counsel for Common Cause and the voter plaintiffs in the lawsuit.

In 2017, Republicans in the General Assembly were forced to redraw maps for the state House and state Senate because the old maps illegally cracked and packed voters on the basis of race. Republicans redoubled their efforts to gerrymander the state’s district lines on partisan grounds, engaging the same mapmaker who had gerrymandered the 2011 maps to weaponize partisan data and prior election results in drawing new districts. In both the state House and state Senate elections in 2018, Democratic candidates won a majority of the statewide vote, but Republicans still won a substantial majority of seats in each chamber. As drawn, there is no conceivable way for Democrats to win a majority in either chamber. Because the governor does not have to sign or veto legislative maps in North Carolina, without legal intervention, the Republican majorities elected under the current gerrymandered maps will have free reign to gerrymander both the state legislative and congressional maps yet again when redistricting occurs in 2021.

“Because lawmakers stubbornly refuse to consider passing redistricting reform, we’re left with no choice but to litigate,” said Bob Phillips, executive director of Common Cause North Carolina. “Gerrymandering is detrimental to democracy, denying voters a choice and a voice on Election Day. We believe we will prevail in court and the people of North Carolina will finally get what they deserve – fair maps for the state House and Senate.”

“Republican leaders in the General Assembly have for nearly a decade divided our state and silenced voters who did not share their same views,” said Wayne Goodwin, Chair of the North Carolina Democratic Party. “North Carolina deserves new, fair maps where every voter can make their voice heard, regardless of their political views. Without it, we risk another decade where partisan politicians’ desire for power comes before the will of the people.”

“The current political system is deeply unfair to voters because it does not allow them to have a voice in their state government,” said Kelly Ward, the Executive Director of the National Redistricting Foundation. “New, fair maps should be in place before the redistricting process takes place in 2021, otherwise gerrymandering could subvert the will of the people for another decade in North Carolina.”

“Partisan gerrymandering discriminates against voters on the basis of their political beliefs, and it undermines people’s faith and trust in representative government,” said R. Stanton Jones, a partner at Arnold & Porter. “Through this lawsuit brought in state court exclusively under the state’s own constitution, we are seeking new, fair maps for the 2020 elections so that North Carolina’s voters, rather than its politicians, can decide who will represent the people in Raleigh.”

The lawsuit alleges that the current maps violates the North Carolina Constitution on three counts. The maps violate the Equal Protection Clause of the state constitution, which provides broader protection for voting rights than its federal counterpart. The maps also violate the state constitution’s Free Elections Clause, which, similar to the Pennsylvania Supreme Court’s recent decision in League of Women Voters v. Commonwealth, should guarantee voters an equal opportunity to translate their votes into representation. And the maps violate the state constitution’s Freedom of Speech and Freedom of Assembly clauses by intentionally burdening the protected speech of voters by making it impossible for them to influence the legislative process.