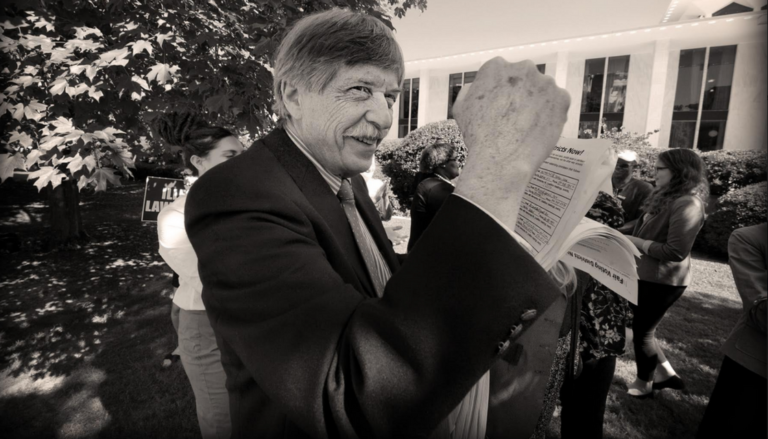 Longtime Democracy NC Executive Director Bob Hall will step down in 2017. Plans for the leadership change, quietly underway for over a year, were announced this morning in an email to the organization’s more than 70,000 supporters.

For the past 25 years, Hall has directed the organization’s campaigns to increase voter participation and reduce the corrupting role of money in North Carolina politics. Major achievements include passage of landmark campaign disclosure, lobbying reform and ethics laws; enactment and defense of same-day registration and pre-registration for teenagers; adoption of public campaign financing programs; and challenges to wrongdoing by Democrats and Republicans (see “25 Years of Speaking Truth to Power”).

In announcing his retirement, Hall said, “It has been an incredible privilege to work with such an amazing group of staff colleagues, volunteers, and board members year after year. I’m completely committed to making sure Democracy North Carolina has a bright future, but it’s time to pass the baton.”

Hall, 72, began full-time work with nonprofit organizations during the civil rights movement five decades ago. He was the founding editor of Southern Exposure, the magazine of the Institute for Southern Studies, where he developed the project that became Democracy NC in 1991. His honors include the MacArthur Fellow Award, NC Press Association’s First Amendment Award, NC NAACP’s Political Trailblazer Award, and NC ACLU’s Frank Porter Graham Award.

In her email to supporters this morning, Democracy NC Board Chair Kim McGuire said, “Bob Hall is a tough and compassionate fighter for democratic principles. We sincerely thank him for giving his heart and brilliant mind to this critically important work, which will continue as his lasting legacy.”

McGuire and Search Committee Chair Julie Mooney have been working with Hall since 2015 to ensure a smooth transition. Consultant Ted Ford Webb is leading the national search for Hall’s successor.

“Because of our work to ‘deepen the bench’ with talented board and staff members during the past year, Democracy North Carolina has never been stronger,” said Mooney. “Over the coming months, we’ll conduct a nationwide search to find the best person to lead Democracy North Carolina as the state’s leading source for research, organizing, advocacy and action around voting rights and pro-democracy reform. We’re excited about building a bright future for the organization and our state.”

"25 Years of Speaking Truth to Power"

Learn more about Bob Hall's decades of nonpartisan work to protect a government of, by and for the people.
Learn More