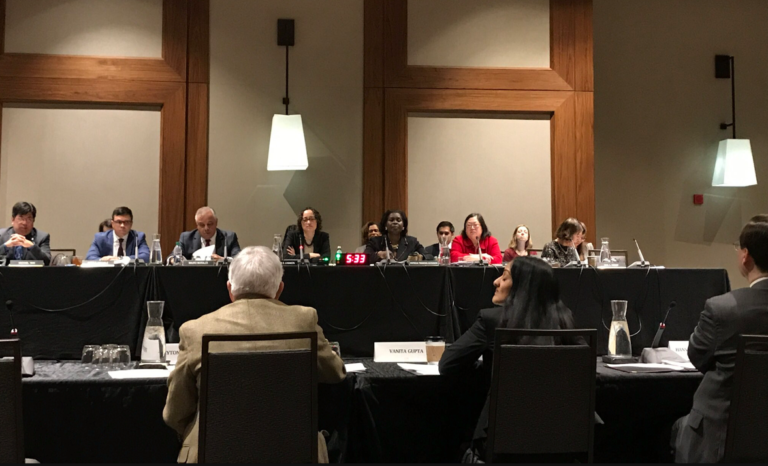 RALEIGH, N.C. (2/2/2018) — The U.S. Commission on Civil Rights hosted a public briefing on voting rights today in Raleigh, N.C., as part of its ongoing assessment of federal enforcement of the Voting Rights Act. Testimony received during today’s series of panels and public comment will inform the Commission’s 2018 report to Congress, the President, and the American public regarding the state of voting rights across the nation.

Lopez, who provided written testimony and participated in an afternoon panel on the Shelby County vs. Holder decision on the Voting Rights Act (VRA) and the Department of Justice’s enforcement strategies and priorities, presented a North Carolina perspective on the importance of reinstating the VRA’s pre-clearance protections.

As part of his written testimony, Lopez pointed to how the gutting of the VRA meant a loss of deterrents to state-level voter suppression in North Carolina like the state’s 2013 monster voter suppression law (HB589) — proposed by lawmakers on the very same day as the Shelby County decision — and local consequences, including reduced voter access and increased voter intimidation.

A North Carolina Perspective on the Importance of Reinstating Pre-Clearance

“North Carolina has suffered from the loss of [VRA] pre-clearance protections at every level: state law, local practice, and the individual voting experience,” wrote Lopez. “The result has been litigation that has been expensive for both the state defending the law and the advocates challenging it; local changes that have tangibly diminished access to the polls; and an environment most hostile to voters.”

Lopez added during his panel testimony, “The failure to restore [VRA] pre-clearance expresses the message: voter access is not a priority for the United States.”

“The Department of Justice (DOJ) should prioritize matters that challenge laws and practices that diminish access to the polls in a discriminatory manner — both in intent and effect — like H589,” wrote Lopez. “We recommend increased resources for these activities, and strongly believe that DOJ should avoid directing attorney resources toward politically-motivated investigations and activities, like those that pursued baseless fraud claims in the 2000s.”

For more than six decades, the U.S. Commission on Civil Rights has monitored the state of voting rights and advocated for more free and fair exercise of the vote. From Reconstruction to the present, North Carolina has played a central role in the evolving story of voting rights in America, particularly under the Voting Rights Act. The U.S. Civil Rights Commission plans to use today’s testimony in North Carolina as a lens through which to examine voting rights nationwide.