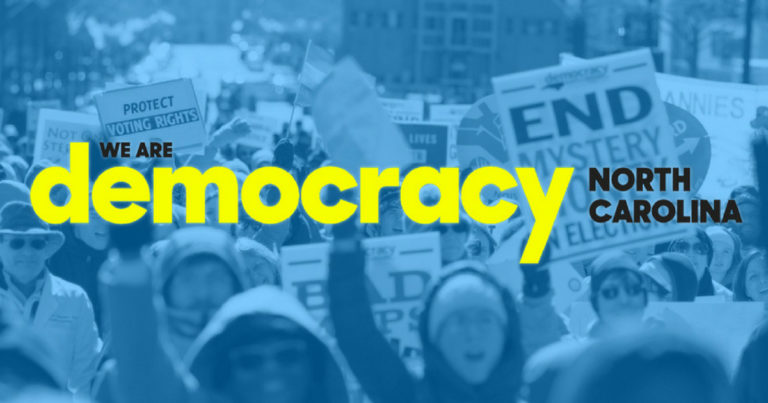 Morrisville, NC (4/30/21) — After several years serving as Democracy North Carolina’s Executive Director, Tomas Lopez announced that he will depart from his role in late summer 2021. The organization’s board chair, Randy Lucas, shared the below email with supporters on April 30, which details both key organizational accomplishments and plans for a national search for a new Executive Director.

A message from Randy Lucas, Democracy NC Board Chair:

Your involvement in Democracy North Carolina’s work is fundamental to our mission to make a just and equitable North Carolina built on a political process that truly works for all. That’s why I’m writing today, as the chair of our board, to share some important news about our organization: the departure later this summer of our Executive Director, Tomas Lopez, and the launch of a national search for a new leader.

Tomas is departing the organization for personal reasons: his significant other has reached an important milestone in her medical career that propels their personal journey away from the state. We wish both of them well, and I want to express my gratitude here for Tomas’s work with Democracy North Carolina over his time with us. In that time, he oversaw the transition from our founding executive director, implemented substantial expansions of our permanent staff infrastructure and revenue, refreshed the organization’s physical facilities, and guided the completion of a new strategic plan for our work moving forward. I hope you’ll join me in thanking Tomas for his leadership.

Most importantly over these years, Democracy North Carolina continued to fight and win for voters across the state. Our work to protect democratic structures, build grassroots power, and promote belief in “lower-case D” democracy has achieved, shaped, and contributed to key wins:

This work will continue because it must. This year, we’re working to build on our wins from 2020, cultivate local leadership for long-term advances, and advocate for fair maps in the critical ten-year redistricting process that will unfold in the fall.

At the organizational level, we have begun the work of seeking out and transitioning to new leadership. Our board has formed an Executive Transition search committee that includes three current and former board members, two current staff members, and an alum of our youth leadership development program, Democracy Summer. They have begun meeting as a group, and aim to steer a comprehensive, equitable, thoughtful, and inclusive transition process. We will share important developments with you in the weeks and months ahead.

In the meantime, please accept my gratitude for being a part of our shared work to transform our state’s democracy into one that works for all.