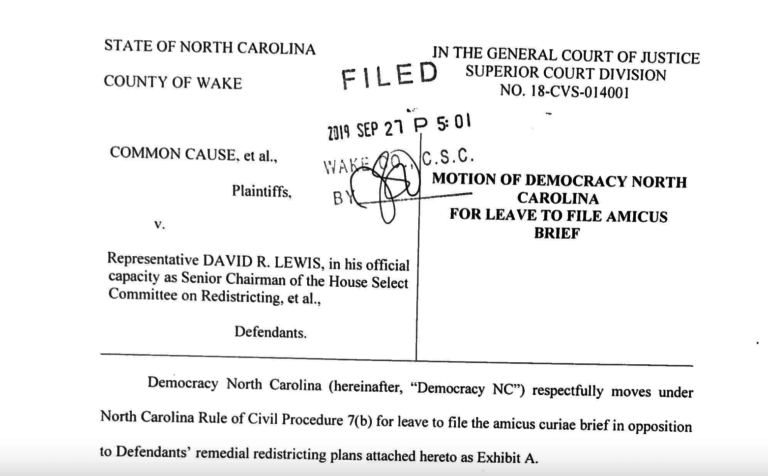 In an amicus brief filed on September 27 in Common Cause v. Lewis, Democracy North Carolina took lawmakers to task for the legislature’s failure “to satisfy the General Assembly’s legal duties to remedy the unconstitutional partisan gerrymandering.”

In response, the voting rights group asks that the court order an independent referee to begin drawing state legislative maps that fully cure the constitutional infirmities in the maps, without causing harm to voters of color, and order those maps into effect for the 2020 elections.

“Democracy NC respectfully asks that this Court find that both the Senate and House remedial plans fail to satisfy this Court’s directives and order the referee to begin drawing state legislative maps that fully cure the constitutional infirmities....” –-Democracy NC Amicus Brief (Common Cause v. Lewis)

Democracy NC has been involved in litigation seeking fair state legislative redistricting plans in North Carolina since the beginning of the current redistricting cycle. The organization is committed to protecting the quality and accessibility of democracy in North Carolina, and has spent more than twenty-five years promoting pro-democracy programs and reforms that expand public involvement and increase fairness and equity in the political process.