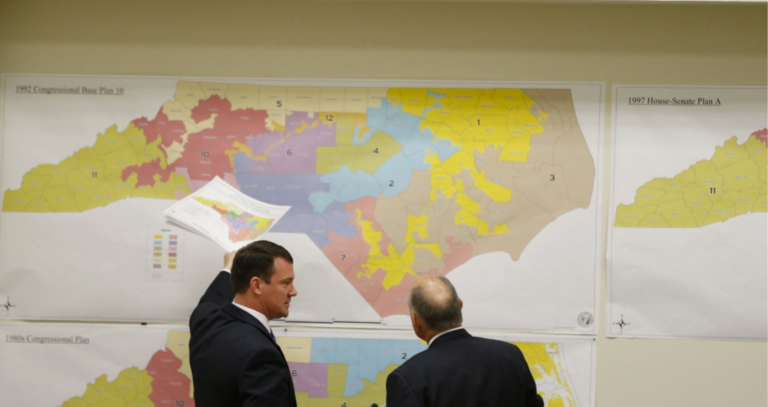 GREENSBORO, N.C. (1/9/2018) — A federal three-judge panel for North Carolina’s Middle District has struck down North Carolina’s 2016 congressional plan as an unconstitutional partisan gerrymander. In striking down the maps, the federal court said, “On its most fundamental level, partisan gerrymandering violates ‘the core principle of republican government . . . that the voters should choose their representatives, not the other way around.'”

“A bipartisan three-judge federal panel sided with North Carolina voters today, holding that the N.C. General Assembly’s partisan gerrymandering is unconstitutional and voters should pick their congressional representatives, not the other way around,” said Lopez. “We applaud the court’s decision and the work of the plaintiffs and their legal teams, who worked tirelessly to hold the legislature’s brazen partisan gerrymander to account. In every corner of North Carolina our supporters have rallied again and again to demand our lawmakers draw fair maps, and with this ruling we expect the N.C. General Assembly to adhere to the court’s order and finally listen to their constituents.”

The court’s order can be found at demnc.co/ruchoruling.

According the federal court’s Jan. 9 ruling, the North Carolina General Assembly has until January 29 to enact a remedial plan. The court also plans to employ a special master to draw an alternative remedial plan, to be enacted before the 2018 congressional elections.

Democracy North Carolina is a statewide nonpartisan organization that uses research, organizing, and training to increase civic participation, reduce the influence of big money in politics, and remove systemic barriers to voting and serving in elected office.