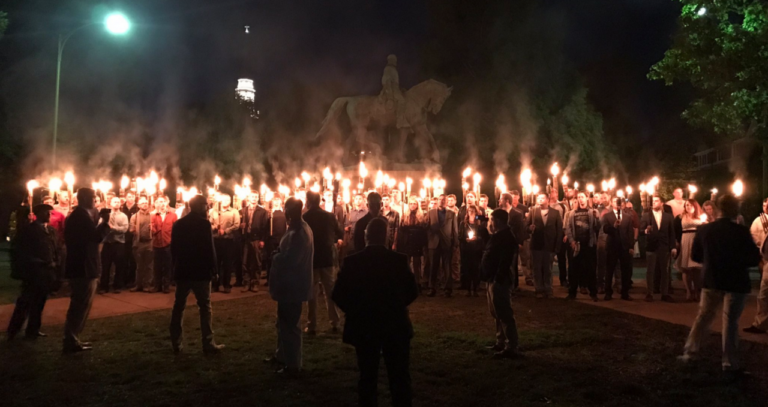 In a statement released to supporters, Bob Hall, on behalf of the Democracy North Carolina, denounced white supremacy and called on North Carolinians to “confront racism, especially in a government that should be of, by, and for the people.”

In the wake of the events in Charlottesville, we want to send a strong, unequivocal message to our supporters:

There is only one side.

It is the side that unflinchingly pursues the promise of an authentic democracy – a social and political system that promotes deep respect for one another, because we are all equals at the ballot box, because we are all worthy and our fates are intertwined.

“In the wake of the events in Charlottesville, we want to send a strong, unequivocal message to our supporters: There is only one side.” –Bob Hall, Democracy NC

That’s why we want you on our side. That’s why our work together matters.

We have fought against cynical legislators who targeted African-American voters with “surgical precision.”  We have opposed the lawmakers who use computerized apartheid to draw political districts that divide our communities and block the development of multi-racial fusion coalitions. These are same lawmakers who seek to elevate themselves by taking away sanctuaries for some, bathrooms for others, and basic protections for anyone who can be ridiculed.

We have tried to reach these legislators through facts, meetings, moral appeals, petitions, lawsuits, mass actions, civil disobedience — but they doggedly stick to their fears and their commitment to a corrupt political culture rooted in white privilege and property rights over human rights.

We at Democracy North Carolina are committed to building fusion coalitions that confront racism, especially in a government that should be of, by, and for the people.

Please continue to stand with us. One week, it’s Virginia. Next week, it will be all of us speaking out against a new set of political maps cleverly designed to divide our state and promote racial polarization.

We must not let hate win.

Tell the NCGA to stop its scheme against Black voters.