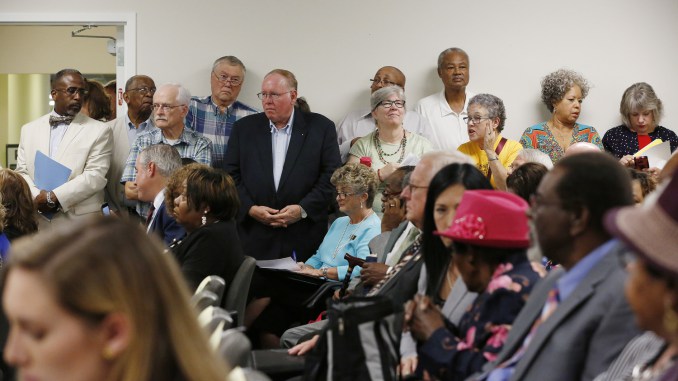 In an amicus brief filed with a federal court on Friday, Democracy NC, NAACP of NC, and the League of Women Voters of NC took Republican lawmakers to task for shutting out the public and holding “sham public hearings” on newly-drawn N.C. House and Senate voting maps.

The “friend of the court” brief chronicles the experiences of North Carolinians at hearings held shortly after maps were revealed to the public,  where speakers at seven sites around the state repeatedly labeled the process as “a farce,” “inexcusable,” and “shameful.” The brief also highlights the technical troubles experienced at many of the satellite locations, most of which drew capacity crowds for hearings that kicked off during working hours.

Despite . . . this Court’s own conclusion that “the General Assembly already has had ample time to enact a remedial districting plan,” the Court graciously granted Defendants extra time to implement their “commendable goal of obtaining and considering public input and engaging in robust debate and discussion.” The Court gave Defendants two options, one with a September 1 deadline and the other with a September 15 deadline; the latter provided more time for meaningful public involvement.

Tellingly, Defendants chose the earlier, September 1 deadline and then proceeded to implement a public hearing process that citizens repeatedly labeled “a farce,” “inexcusable,” and “shameful.”

“[A] hearing three days after the maps have been released and a day after the data is released is just ridiculous,” John Haywood told legislators at the Beaufort County Community College. The college was one of seven sites opened for a simulcast public hearing on August 22 – except most sites were in cramped rooms with inferior audio-visual systems.

“I think it was totally disrespectful for us to be here at 4:00 p.m. in a room this small,” Pam Woods said at the Beaufort location. “It can’t be a public meeting if the public can’t get here.” Other locations were even worse. The rooms chosen at the community colleges in Fayetteville, Charlotte and near Greensboro had an announced combined capacity of 151 seats – but more than 350 people showed up at those locations on August 22.

Ironically, Defendants blamed the Court’s scheduling for their inability to select better venues and disclose their maps well ahead of the hearings. Instead of pursuing what the Court called a “commendable goal of obtaining and considering public input,” Defendants’ actions demonstrated a fundamental disrespect, if not contempt, for the public’s involvement and, indeed, for this Court’s decision to grant them extra time. Amici Democracy NC and LWV NC believe it’s important for this Court to receive a detailed description of these actions and the deep disappointment the public feels about the public hearing process.

Enhancing public participation is central to the missions of Amici; respecting the will of the people is central to the state and federal constitutions. The North Carolina Constitution, for example, is replete with such declarations as, “All power is vested in and derived from the people” and “[t]he people have a right to . . . instruct their representatives.” The process used by Defendants to draw the maps completely contradicted these mandates. Combined with the fact that Defendants have had more than ample time to remedy their maps’ deficiencies, we urge the Court to take full control of any further map drawing, protect the public’s interests, and bestow no more generosity upon Defendants.